In a world where temples are dying and sacred theaters have been replaced by brothels, what will happen when a hard-headed businessman joins forces with an idealist?

Michael's House is an alternate history series on love in a Progressive Era slum.

"Does a wonderful job in creating a unique world set during Edwardian times. From the buildings to the wardrobe and the attitude of the people, every detail is described in a way that drew me into the story and made the story come to life. . . . Brimming with character interactions, emotion and introspective character narrations, the concept behind the story was brought to the page in an engaging and understanding way." LeAnn's Book Reviews (Shirley Frances; review includes major spoilers).

"The relationship between . . . Michael and Janus is one of those unforgettable pairings that will live with the reader long after they finish the story." Goodreads (A. B. Gayle).

"'Delicate' may seem like an odd word to use for such a story, but it's written with a delicacy that reveals the humanity of its characters rather than exploiting them. [Michael's House] is a deeply moving story about survival in the underbelly of a culture that despises the people it uses and casts them off like so much garbage." Goodreads (Catana).

"Tease away the outer layers [of the story], and a whole fascinating world of triumph over tragedy emerges." Rainbow Reviews (British Bull Dog). 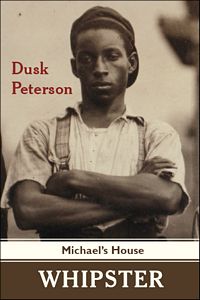 Michael is an ex-prostitute, which means that nobody in polite society wants anything to do with him. He believes that the only way to help other male prostitutes is to make their working conditions bearable. His friend Janus is an upper-class gentleman who believes that his duty to the gods requires him to fight against sexual immorality. Now Michael wants Janus to help him run a house of prostitution.

The New Boy. Running a business seemed a simple enough matter: you learned what the patron wanted, and you forced an employee to satisfy his needs. Then along came the new boy.

Offstage. Michael's House is facing ruin  unless one of the partners falls back on old ways.

Blurred Lines. Michael has survived poverty, prostitution, and the loss of love, but not even his partner may be able to help him overcome the latest challenge.

For two years, Michael's House has managed to survive in its competition against richer, less scrupulous pleasure houses. Now matters are reaching a climax at this unorthodox house of male prostitution: money is running out, social reformers are arming themselves for battle, legislation threatens to shut down the business, and worst of all, signs are growing that Michael will be betrayed by his closest companions. Will he have any allies left by the time he reaches the end of his fight?

¶ Upcoming. To receive notice of Patreon releases and online fiction, subscribe to Dusk Peterson's e-mail list or blog. See below for a progress report on upcoming fiction in this series.

In this cycle of five short stories, five young men in troubling situations must make choices that will change the path of their upcoming lives . . . and the path of the societies they dwell in.

Bibliography for this series:
Masculinity, Crime, and Everyday Life in Victorian and Edwardian Times.

Shared Universes: Works set in the Michael's House world by other authors and artists.

Updated August 2016. All titles and ordering are tentative at this point.


Other stories in the series aren't yet written.

This text, or a variation on it, was originally published at duskpeterson.com as part of the series Michael's House. Copyright © 2003-2020 Dusk Peterson. Some rights reserved. The text is licensed under a Creative Commons Attribution Noncommercial License (creativecommons.org/licenses/by-nc/3.0). You may freely print, post, e-mail, share, or otherwise distribute the text for noncommercial purposes, provided that you include this paragraph. The author's policies on derivative works and fan works are available online (duskpeterson.com/copyright.htm).