How can a youth from a bay island boarding school survive when he is sent to a futuristic prison?

Waterman is an award-winning speculative fiction series of love in an alternative version of the Chesapeake Bay region during the 1910s and during the future as it was envisioned in the 1960s.

Note: Many of the side stories were originally published under the series name Young Toughs. 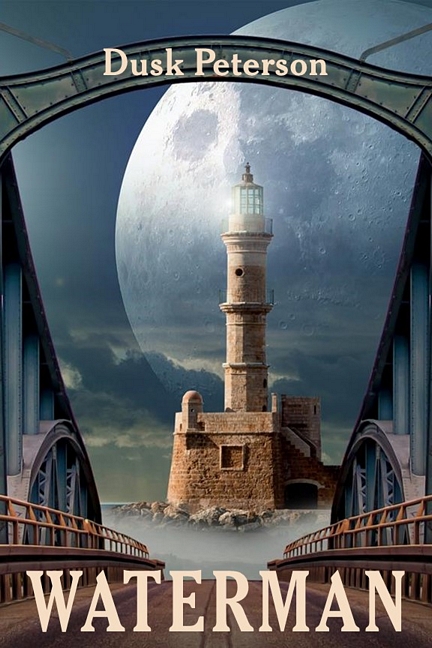 Finalist, Best Gay Fantasy category, in the Rainbow Awards 2013, for Master and Servant #1: The Abolitionist.

Four honors in the Rainbow Awards 2016 for the stories Lost Haven, Master's Piece, The Lure, and Journey to Manhood, as part of the collection Risk:

"What I love of Dusk Peterson's stories is that they are all fantasy . . . with deep roots in real history. While reading one of his books, whatever the historical period he picked and reinvented, you have the feeling [of being] plunged in a true historical novel, sometime even more an historical essay than a romance, but in the end, Dusk Peterson manages also to give you the romance, and odd as it sounds, most of the time his romances are among the most romantic I have ever read. Why odd? Since I think I have never heard Dusk Peterson associated with the romance world; so here is my suggestion to all the romance readers: go and pick one of Dusk Peterson's [e-books], this one in particular is a good pick, and give him a try, I'm sure you will not be disappointed." My Reviews and Ramblings (Elisa Rolle).

"The underlying theme of the stories is inherited power relationships, the effect on individuals of being unable to fit into the established hierarchies, and the wisdom of learning from those below you." Goodreads (Catana).

"The emotions and ethics and world-building are rich, deeply satisfying and sexy." Amazon (Yingtai/Justine).

"Finally someone who is good at writing stories which appeal to my quirky intellectual mind and deliver the goods (so to speak). Extremely satisfying." Anne Blue, publisher of Kanallje Press. 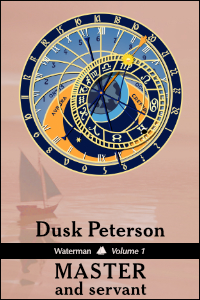 Master and Servant (Volume 1 of Waterman)

Born into a society with a strictly ranked system of masters and servants, Carr has sought to tread his way delicately between the clashing values of the parents who raised him and the uncle whose household Carr will one day live in. Yet when he and other students at his boarding school become the latest participants in an ongoing battle between the oystermen of their Bay, Carr finds that his position of power may bring danger, not only to himself, but also to a schoolfellow he is drawn toward.

The Abolitionist. When a foul-mouthed, seditious foreigner turns up at your door, what are the benefits of letting him in?

The True Master. In a society where the rank of master or slave defines every aspect of a person's being, what do you do when you're a master and you envy your slaves?

Side stories set before, during, or after the events of Master and Servant.

The deepest sacrifices arise from love.

Lost Haven. Amidst a servant's nightmare, can a haven of hope be found?

¶ Upcoming. To receive notice of Patreon releases and online fiction, subscribe to Dusk Peterson's e-mail list or blog. See below for a progress report on upcoming fiction in this series. 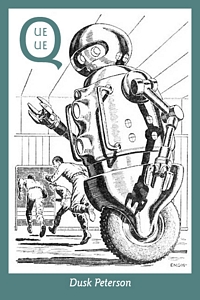 Set before, during, or after the events of Master and Servant:

As Pip longs for the unobtainable, his master finds that he is beginning to have doubts about a long-standing custom in his nation. Yet how can he risk giving up what he values most?

His entire life has been a secret. Now he must rip open the secret.

Hannibal S. Mercer has lived all his life in an isolated island home with his loving parents and two servants. Hannibal never receives the opportunity to meet anyone else. The older servant doesn't speak to Hannibal. The younger servant might or might not be an ally in time of trouble.

Now trouble has arrived. When hostile strangers invade Hannibal's world, he must uncover the truth his parents have been hiding from him. And then he must make a choice that will determine the course of his life.

He knew he wasn't normal. Now he must save others who have been left behind.

For two years, since his parents left for the west coast of the continent, Phillip Schafer has lived in a mountain home, as far as he can get from society. But when the loss of his beloved companion forces him out of his refuge, he finds that the world is on the cusp of change. And he may be one of the few people left who is able to outrace that change.

Accompanied by two unusual allies, Phillip must escape from his nation before disaster strikes. But with no jet-car, he must somehow reach the skyport before the last rocket blasts off. . . .

In this cycle of five short stories, five young men in troubling situations must make choices that will change the path of their upcoming lives . . . and the path of the societies they dwell in.

Kit has reached her apprenticeship birthday and is on a path to inherit power. But what sort of power will she wield?

A journey from the First Landstead to the neighboring Queendom of Yclau seems an easy enough day-trip for two young women and a faithful young servant. Kit and Honey will simply catch a monorail to the queendom's capital and enjoy their first sight of a foreign nation.

But Yclau is not the First Landstead. It is a land of robots, memories of the Bomb, and a lingering fear of what might occur next.

Kit is determined to have her birthday the way she wanted. But she will need allies for her fight, and one of them is an ally she did not expect.

How far can trust grow, when you're in a place you despise?

Arrested for a crime he doesn't regret, Bat ends up handcuffed to a group of fellow city boys and sent on a long journey into the countryside. He know that he is being transported to a prison for delinquent servant boys, but what form will his imprisonment take?

Tattooed with the rank-mark of servant, Bat must learn how to keep from losing his temper with the men who carry the keys to his freedom. But in the unbelievable world where he has been deposited, in which a genial master orders strict punishments and a servant acts like a master, will Bat be able to locate the door to his release? Which of his fellow prisoners can he trust to help him?

And will he survive long enough to find out?

Tripp has two friends in high school: a rebel without a cause, and a girl fighting the social restraints upon her. But only one human being has any real hope of understanding Tripp, and he isn't human at all.

It's sweeping day again, and her task seems straightforward: clean the dirt in her master's study and leave.

But Sally's master is no ordinary master, and Sally's sweeping could be the trigger for war. Finding herself in a dangerous trap, Sally must draw upon the wisdom of her allies in the servants' kitchen before disaster strikes.

Bat is in trouble. Again.

The only way out of the trap this time is to take a leap into the future, into a world of wonders that his mind can scarcely grasp.

But trouble awaits him at the border to his refuge. How Bat handles that trouble will determine his own future . . . and the future of what he is leaving behind.

What should a young servant do when his employer may fire him at any moment, his employer's beautiful daughter is absorbed with her high school textbook ("How to be Firm with Servants"), and he's blocked from carrying out a simple task by a snooty cyborg?

Simmons has been waiting all his life for the day when he would come of age and pledge his service to a liege-master. But at the last minute, all his plans go awry; he is left in the awful position of having to find a liege-master quickly. Desperation may force Simmons to pick the worst of liege-masters.

Working at his uncle's waterfront store on a bay island, Simmons seeks a way out of his dilemma. Then another young man walks through the door, one whose problems may be even worse than Simmons's. . . .

Return to the volume index.

Waterman research. Blog entries by the author on research for the series. Earlier entries are labelled "Prison City research."

Bibliographies for the series:
Islanders and Watermen of the Chesapeake Bay.
Masculinity, Crime, and Everyday Life in Victorian and Edwardian Times: Boarding Schools.
Retrofuture: Visions of the Future, 1945-1975.

Updated May 2020. All titles and ordering are tentative at this point.

The numbering within this volume is especially tentative. I'm not sure how many stories there will be, other than the ones I've listed.

This text, or a variation on it, was originally published at duskpeterson.com as part of the series Waterman. Copyright © 2002-2020 Dusk Peterson. Some rights reserved. The text is licensed under a Creative Commons Attribution Noncommercial License (creativecommons.org/licenses/by-nc/3.0). You may freely print, post, e-mail, share, or otherwise distribute the text for noncommercial purposes, provided that you include this paragraph. The author's policies on derivative works and fan works are available online (duskpeterson.com/copyright.htm).