This site traces two years in the life of a Washington, D.C., suburb that struggles to retain its small-town past. 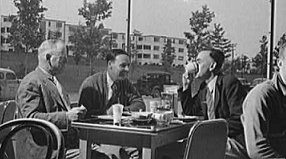 A snack in the local drugstore –Greenbelt, 1942. Detail of photograph by Marjory Collins (photo from the Library of Congress).

[ Skip to the articles ]

Greenbelt, Maryland, doesn't look like a small town. As of the year 2000, its population was over 20,000, and the city is pervaded by the usual clutter of modern suburban life: giant parking lots, fast food restaurants at a mall, and no less than four major highways and roads.

It is also pervaded by parks.

The parks, which occur every few yards in the historic part of the city, are a visible indication that Greenbelt was founded as a planned community. Opened in 1937, it was the first of three greenbelt towns built by President Franklin D. Roosevelt's administration during the New Deal. The town was intended to provide moderate-income public housing and to serve as an experiment in community building. Greenbelt was designed to encourage family life through a pedestrian-oriented layout (with inner walkways and parks) and central, community-owned businesses.

Greenbelters had a reputation from the start of being exceedingly civic-minded; at one point the town's children were rumored to be organizing a campaign to "keep parents home and off of committees." As a result of its physical features and its tradition of community volunteering, Greenbelt retains some of the neighborliness of small-town life. At the same time, it must struggle with the usual problems of present-day suburbia: rapid development, rising crime, and a population so large that many citizens are not acquainted with one another.

This site documents the events in Greenbelt over two years, providing a glimpse of life in a suburb that tries to retain its original sense of community.

An early issue of the Greenbelt News Review, then named The Cooperator.

THE ORIGINS OF THE ARTICLES

I began writing about Greenbelters in 1978, when I was in high school. Most of the articles below were written for the Greenbelt News Review, which is not only one of the oldest community organizations in Greenbelt but was also the defendant in a Supreme Court case that helped establish freedom of speech for American newspapers. Those articles are reprinted from their original drafts, before copyediting and editorial revisions.

The remaining articles were published in my own newsmagazine, Greenbelt Interfaith News.

I have also reprinted here a couple of humorous articles I wrote on community life during my earlier journalistic career. 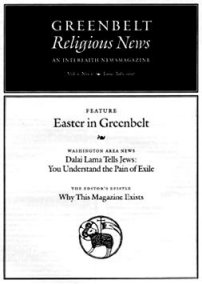 Tour of the New Community Center. "We're back in 1936 now," explains Recreation Department employee Karen Haseley to the people accompanying her on a tour of the Community Center on March 16. [Greenbelt News Review]

Artists Move into the Community Center. McMullin says that their initiation to the Community Center was daunting. "The thing that happened right away was a posted list of rules," he said. The rules forbade such things as children visiting late at night, alcohol, and nudity. [Greenbelt News Review]

City Easter Celebrations. Easter Bunny had a pink chest and blue eyelids, and a tendency to look shy when he was having his picture taken. He also had a gap in the back of his suit. One boy who wished to be helpful cried out, "Hey, Easter Bunny, your back fly is open!" [Greenbelt News Review]

Labor Day. The floodlights were on at the field, and the sky behind was beginning to turn bright magenta. The sunset eerily echoed the scarlet background of the stage as the festival's opening ceremonies began. The usually bustling crowd near the information booth came to a halt as people stood for the singing of the national anthem. Nearby, Notlim the Clown was surrounded by children, smiling as he handed out green wigs and red styrofoam noses. [Greenbelt News Review]

Two Halloween Parties: A Critique. Every year, the arrival of Christmas is heralded by articles and newscasts which contrast the holiday's old-fashioned celebrations with modern, commercialized customs. Similar tensions are affecting all American holidays, as demonstrated by two recent Halloween celebrations in Greenbelt. [Greenbelt News Review]

Festival of Lights. Winter was on the minds of everyone, as became clear when Mayor Antoinette Bram mentioned that Hank Irving was "the snow removal guy," causing the small crowd to erupt into cheers. [Greenbelt News Review]

Santa Arrives. "It's nice and warm here in Greenbelt," announced Santa Claus as he walked down the hallway of the Community Center. "It was below zero up in the North Pole. I couldn't even take a shower – the water was frozen." [Greenbelt News Review]

Holiday Concerts. The evening began on a note of unintentional humor as the audience joined the choir in singing "O Little Town of Bethlehem." Unwary visitors did not notice that the text provided a revised version of the carol, with the result that half the audience sang of "meek souls," while the other half sang of the more modern "yearning souls." [Greenbelt News Review]

Holiday Carollers. There had been no plans to enter Green Ridge, but when one of the carollers revealed that she had a grandmother living there, there was spontaneous agreement among the carollers that it would be nice to sing indoors. Perhaps it had something to do with the cold. [Greenbelt News Review]

New Year's Eve. Downstairs, a bewildered pizza delivery man was trying to squeeze his way through the crowds on the ground floor. He passed the Resolution Wall, where Greenbelters were writing their New Year's resolutions. "My resolution is to get Honor roll and Good stutinte," one Greenbelter had written. Another declared, "I promise not to lick any cold metal poles this winter." [Greenbelt News Review]

Youth Rock Group. "All the wine cases, they're empty; here's a party going down.  There's a band playing . . ." In actual fact, the rehearsal room is littered with soda cans and granola bar wrappers. This is hardly surprising, since the band which is playing consists of four seventh-graders from Kenmoor Middle School. [Greenbelt News Review]

A Jubilant Jubilee at St. Hugh's. Many of the items gave evidence of changes in the Catholic Church over the past fifty years. Pictures of sisters (nuns) in stiff habits were accompanied by a 1973 picture of a sister wearing a simple dress, and sweater. [Greenbelt Interfaith News]

The Last Baccaulareate Service? Roosevelt High School Seeks to Revive a Dying Tradition. Out of 695 seniors graduating in 1997, about 50 had shown up for the ceremony. It was a strange sight for a graduation ceremony – but of course this was not a graduation ceremony. This was a baccalaureate service, a worship service for graduates, and attendance was voluntary. Most of the seniors had voluntarily stayed away. [Greenbelt Interfaith News]

St. George's Holds a Bilingual Service with a Difference. In the words of St. George's vicar, the Rev. Michael W. Hopkins, "This is a unique experiment, having a service where there are hearing persons, but they're not the ones in charge." [Greenbelt Interfaith News]

Thanksgiving Service Remembers Good Samaritans. "Several years ago, the rear wheel of my car fell off in the middle of a snowstorm while I was in Birmingham, Alabama," he said. "I had four dollars in my pocket, which I gave to my wife and children and sent them across the street to eat at McDonald's." [Greenbelt Interfaith News]

Bahá'í Elections Mark New Era in the Faith. "College Park is going to meet in the office upstairs, and I think they're going to need to take about four chairs with them," said Jerry Cott. "Downstairs in the basement will be Prince George's County North; I think there's enough chairs down there for you now." [Greenbelt Interfaith News]

Maryland City Removes Reindeer from Holiday Lights Display After Citizen Complains. The city staff of Greenbelt thought they had done everything right: they gave the city's holiday celebration the neutral title of "Festival of Lights," they scheduled classes to teach Hanukkah and Kwanzaa crafts, and they set up a lights display consisting of such secular symbols as Santa, snowmen, and reindeer. Then a citizen complained that the reindeer were too religious. [Greenbelt Interfaith News]

A BIT OF HUMOR: Life in Other Communities

Another Day in the Life of a Small-Town Reporter. Two articles I wrote during a short period when I worked for a newspaper in a very peaceful village in Western New York. Both of these are reports on three-hour meetings. I post them here for the amusement of those who don't know what reporting for weekly newspapers is like, and for those who know all too well. [Gowanda Penny Saver News]

Professionals at Work. The final article I wrote for my high school journalism class. Like most of my articles in high school and college, it was a satire, but it gives a good sense of what it was like to work for my school's newspaper. No prizes for guessing who the features editor was. [Previously upublished]

E-mail may be sent to Dusk Peterson.

This text, or a variation on it, was originally published at duskpeterson.com. Copyright © 2004, 2007 Heather Elizabeth Peterson. Some rights reserved. The text is licensed under a Creative Commons Attribution Noncommercial License (http://creativecommons.org/licenses/by-nc/3.0). You may freely print, post, e-mail, share, or otherwise distribute the text for noncommercial purposes, provided that you include this paragraph. The author's policies on derivative works and fan works are available online (duskpeterson.com/copyright.htm).