THE GREAT PENINSULA: series resources for Chronicles of the Great Peninsula ¶ By Dusk Peterson 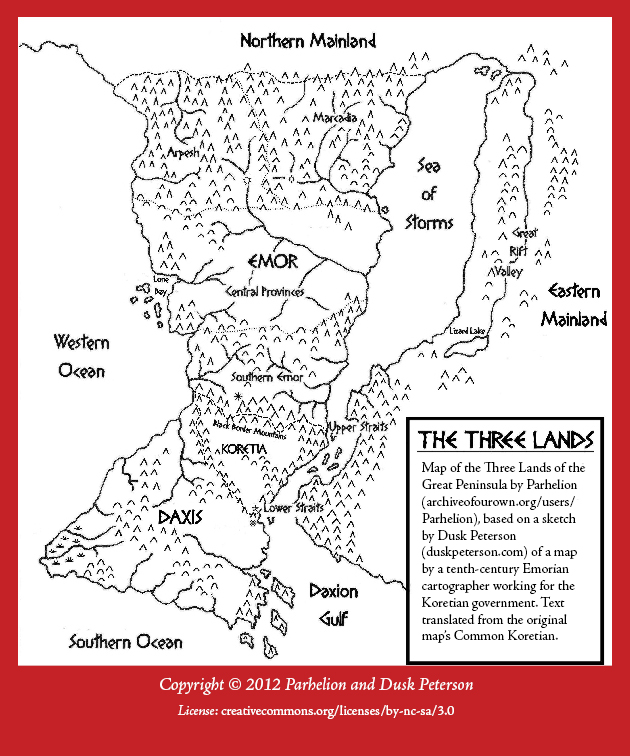 Chronicles of the Great Peninsula is a cycle of fantasy series about an epic battle between cultures, set at a time when a centuries-old civilization is in danger of being destroyed.

The Thousand Nations. In a shattered world of warriors and barbarisms, only the deepest ties of friendship and romance can protect them. That, and a god they may not be able to trust. ¶ The Thousand Nations is a fantasy series about what happens after the fall of a civilization. The series is inspired by conflicts between nations during the Dark Ages.

This text, or a variation on it, was originally published at duskpeterson.com as part of the series The Three Lands. Copyright © 2011-2019 Dusk Peterson. Some rights reserved. The text is licensed under a Creative Commons Attribution Noncommercial License (creativecommons.org/licenses/by-nc/3.0). You may freely print, post, e-mail, share, or otherwise distribute the text for noncommercial purposes, provided that you include this paragraph. The author's policies on derivative works and fan works are available online (duskpeterson.com/copyright.htm).