Landstead Ternary Symbols and Their Meanings

This page is part of the resources for Turn-of-the-Century Toughs, a cycle of alternate history series about adults and youths on the margins of society, and the people who love them. Set in the nineteenth and twentieth centuries, the novels and stories take place in an alternative version of America that was settled by inhabitants of the Old World in ancient times. As a result, the New World retains certain classical and medieval customs.

What the ternary system means in the Dozen Landsteads

Historians cannot agree whether the Dozen Landsteads' ternary (base 3) system grew out of the Landsteaders' traditional three-field agricultural system, or whether instead it was inspired by the three primary tenets of the Landstead faith: death, transformation, and rebirth. In any case, a large proportion of Landstead concepts are grouped into threes or multiples of threes.

For more about the Dozen Landsteads' calendar, see: Old Calendar.


What the circle means in the Dozen Landsteads

The most striking way in which the Landstead ternary system differs from our own system of numbers and letters is that it is based on a circle rather than a straight line. (This can be seen most clearly from the fact that the alphabet wraps around on itself.) In our world, only time (the clock and calendar) is usually represented in circles, while increasingly that circular representation is being abandoned in favor of linear representation (for example, the digital clock). Likewise, our alphabet is almost invariably represented on a straight line rather than on the perimeter of a circle. And though we do acknowledge the existence of negative and positive numbers, we don't think of them as circling back on each other. This way of thinking clearly arises out of the Landstead belief that death (the end) is followed by transformation (the middle) and rebirth (the beginning). That belief may have been influenced by the seasonal cycle of the sun-circuit.

The English language is considered to be a particularly rich language because its words often have many different meanings which resonate at different levels. (Ancient Greek is an even more striking example of this phenomenon.) Similarly, Landstead ternary symbols have so many different meanings that any single word is practically a work of poetry in itself, regardless of its base meaning.

As an example of the way in which this pervasive use of the ternary system provides rich layers of meaning to the symbols, let's look at the name "Carr." Its base meaning is "from the wetlands." However, the word would have many other meanings to a Landsteader, simply because of how it was represented in the Landstead ternary sytem.

Carr's name appears as follows in the ancient Landstead alphabet. (The modern alphabet, not shown here, is simply a cursive form of the ancient alphabet.)

The symbols of the alphabet also represent numbers, so Carr's name (much to the delight of numerologists) has a numeric equivalent:

The three digits of the ternary system (– and 0 and +, named hyphen and circle and cross) can be represented by colors:

These colors became vitally important in the development of telecommunication in the Dozen Landsteads, because the colors became the basis for the Landsteaders' code systems.

In the First Landstead, this was succeeded (upon that territory's precociously early invention of fiber optics and lasers in the 1930s) by the optic telegraph, which used the same color symbols as the heliograph. The heliograph and optic telegraph symbols for Carr's name are as follows:

The telegraph symbols later became the basis of the code developed in the First Landstead for use in that territory's optical computers. Computer trits (computer ternary digits) consist of red, blue, and green lasers, which are flashed in succession, just as the earlier telegraph codes were. The most common trytes (a group of 27 trits) are based on the telegraph symbols, but with blues (zeros) added at the beginning of each tryte to fill up all the spaces until nine trits are reached. The trytes for Carr's name are as follows:

A more compact and easily memorable way for the name to be displayed by a computer to humans is through the use of a Landstead calendar circle. Calendar circles are divided into 27 parts to show the 27 weeks of the year, the 27 letters of the alphabet, and the 27 basic numbers that appear in the multiplication tables (-13 through 13).

These calendars are extensively used in Landstead primary schools to teach the calendar, the alphabet, and the number system. Thus any Landsteader immediately knows that a light just to the left of the bottom of a calendar circle represents the Landstead equivalent of the letter A.

Therefore, Carr's name could be shown by a computer through the successive flashing of four pie-segmented lights in a circle, corresponding to these four weeks: 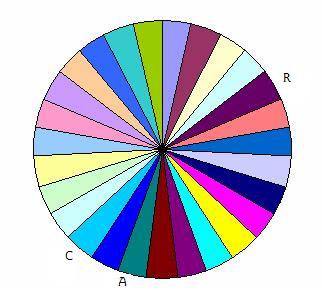 The week positions simply represent visually the numbers that Carr's name corresponds to:

. . . which brings us (appropriately) full circle back to where this discussion began.


Which parts of all this occur in our own world

Ternary (base 3) numbering systems really exist. The one used in the chart above is a system called balanced ternary notation. Balanced ternary allows for easy arithmetic operations. Unlike the binary code used in computers, balanced trinary has an built-in system for showing negatives.

One of the earliest mechanical calculators, built in 1840 by Thomas Fowler, did ternary calculations. In the 1950s, a Moscow State University scientist designed a computer, Setun, which used balanced ternary. In 1970, a successor, Setun 70, used trits and trytes (though they weren't the same size as the trits and trytes I cite above).

In the late 1960s, two optical computers were invented: the IBM 1360 Photo-Digital Storage System (also known as Photostore) and the FM 390 (designed by Foto-Mem). The FM 390 was intended to use lasers to record information on standard microfiche cards, but it was never built. The IBM 1360, which placed data on film through use of an electron gun, became the world's first storage device to hold a terabit of data (approximately 160 gigabytes). More recently, our world is in the process of developing optical computers using lasers, though, as far as I know, they all use the binary system.

Heliographs (using white light) were invented in our world in the 1870s and were used by the British and American armies to transmit Morse code. Morse code, which was developed in the 1830s, used dots, dashes, and space to represent numbers and letters.

Similarly, braille (invented in 1824) uses dots and spaces to represent letters and numbers. In braille, as in Ancient Greek and Hebrew, letters double as numbers.

The number of seasons, months, and weeks have varied in our world according to which calendar system is used. The Roman calendar, which originally had ten months, included months whose names corresponded to their numbers: September (seventh month), October (eighth month), November (ninth month), and December (tenth month).

Ternary logic in our world has three values. In the balanced ternary sytem, they look like this:

The religious symbolism of death, followed by transformation and rebirth, is of course quite common in our world, and it has affected how we keep our calendars; for example, celebrations of death and rebirth commonly occur on the winter and summer solstices.

The fact that our alphabet is only one letter short of the 27-digit number/alphabet system of the Dozen Landsteads is pure coincidence. I'm not averse to taking advantage of coincidences.

This text, or a variation on it, was originally published at duskpeterson.com as part of the novel cycle Turn-of-the-Century Toughs. Copyright © 2006-2016 Dusk Peterson. Some rights reserved. The text is licensed under a Creative Commons Attribution Noncommercial License (creativecommons.org/licenses/by-nc/3.0). You may freely print, post, e-mail, share, or otherwise distribute the text for noncommercial purposes, provided that you include this paragraph. The author's policies on derivative works and fan works are available online (duskpeterson.com/copyright.htm).