CHRONICLES OF THE GREAT PENINSULA ¶ By Dusk Peterson

Chronicles of the Great Peninsula is a cycle of mythic fantasy series about an epic battle between cultures, set at a time when a centuries-old civilization is in danger of being destroyed. The cycle is inspired by conflicts between nations during Late Antiquity.

THE THREE LANDS. He vowed himself to his god. Now the god is growing impatient . . . ¶ The Three Lands is a mythic fantasy series on friendship, romantic friendship, romance, and betrayal in times of war and peace. The series is inspired by conflicts between nations during the final years of the Roman Empire.

THE THOUSAND NATIONS. In a shattered world of warriors and barbarisms, only the deepest ties of friendship and romance can protect them. That, and a god they may not be able to trust. ¶ The Thousand Nations is a mythic fantasy series about what happens after the fall of a civilization. The series is inspired by conflicts between nations during the Dark Ages.


THE THREE LANDS: a Chronicles of the Great Peninsula series ¶ By Dusk Peterson

He vowed himself to his god. Now the god is growing impatient . . .

The Three Lands is a fantasy series on friendship, romantic friendship, romance, and betrayal in times of war and peace. The series is inspired by conflicts between nations during the final years of the Roman Empire.

Series page for The Three Lands at Archive of Our Own, with full blurbs and tags (which may spoiler earlier stories in the series).

Table of contents to the Three Lands titles below. 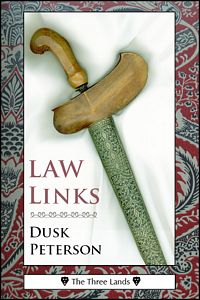 Few events are more thrilling in a young man's life than a blood feud between two villages. Or so Adrian thought.

Torn between affection toward his traditional-minded father and worship of his peace-loving, heretical priest, Adrian finds himself caught between two incompatible visions of his duty to the gods. Then the Jackal God sends Adrian a message that will disrupt his world and send him fleeing to a new and perilous life.

Famine or Feast. Adrian knew that friendship was a fundamental custom of all mankind. Or so he thought, until his closest friend discovered a mysterious journal.

Season of Dangerous Peace. His village is dead, his baron broken beyond mending. Now, as the year reaches the season of peace, the baron's heir must decide whether to keep his family hidden, safe from the blood feud that is ravaging their kingdom, or to enter danger in quest of a higher goal. 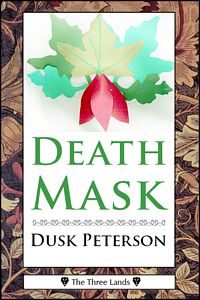 For eighteen years, he has survived in an army unit where few soldiers live more than two or three years. Now he finds himself in circumstances where his life is a living hell. Will the soldier who defied death find that life is too great a challenge?

Soldiers, spies, slaves, rebels, assassins, gods, and men who set out to break him . . . The Lieutenant of the Border Mountain Patrol will learn that his greatest test is himself. 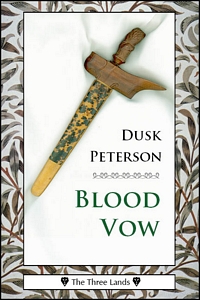 He has taken a blood vow to the Jackal God to bring freedom to his land by killing Koretia's greatest enemy. But what will he do when the enemy becomes his friend?

Thrust into exile and pain, young Andrew has no choice but to accept the friendship of the very person he had vowed to kill. When he returns with his friend to his homeland fifteen years later, though, he finds himself in a land of conflicting loyalties . . . where a vengeful god awaits him. 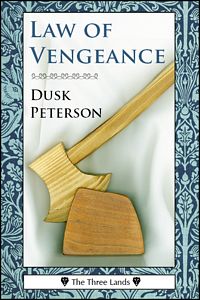 For over twenty years, Lord Carle has told the heir to the Emorian throne that vengeance is only the other side of mercy, and that disobedience and treachery should never be forgiven. Finally it seems that his message has been received. Which makes it all the more unfortunate that Carle should have chosen this moment to break the law.

As war threatens and the foundations of his life crumble, his only hope for rescue lies with a man who has every reason to hate Carle.

=== SIDE STORIES TO BLOOD VOW AND LAW OF VENGENACE ===

The Fire Before. The god's fire is fierce, but not as fierce as the god's wrath if you turn away.

Re-creation: gift for a slave. What can you give a slave who, by law, can own nothing?

Free-man's Blade. Free-men are the backbone of Emor: the men who run and protect the empire. But when a young servant finds himself unexpectedly vaulted into manhood, he must decide how he will use his power, and who will pay the price of his decision.

Hidden Blade. His father is a dull farmer. His mother is a dull farmer's wife. He seems destined for a similarly dull life. But then a stranger appears in their village, and suddenly the talk is of soldiers and spies and secrets and gods. Will he be able to break free of his father's legacy and make a bold dash to a life of his own?

Guise. Daxis is the land of bards and of truths too painful to be faced. When a man in the guise of a Koretian trader visits Daxis for his own purposes, he is confronted with memories of a battle from the past, as well as a challenge for his future. 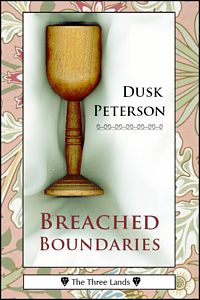 The boundaries of rank declare that Serva can be a princess or she can be a slave. But for the bastard daughter of the King of Daxis, life is not that simple.

Forced to be a tool in a battle waged by her land's unstable King and his dangerously devious heir, Serva cannot even find refuge among her fellow slaves. Instead, she secretly explores the hidden portions of the palace. In this way, she meets an imprisoned spy who is scheduled for execution.

But when a simmering war bubbles to the surface, Serva must choose where her loyalties lie. She must also solve the mystery of the spy's past, and of her own future.

Adversaries. When an endangered slave visits an imprisoned spy, she discovers that she has more options in life than she had thought.

Challenge. When danger arises, an enslaved princess must reconsider her decision to remain loyal.

Stakes. As war thunders forth, a fleeing slave-princess discovers that all is not as she thought.

Battle. The best way to hide may be in plain sight. Or perhaps not.

Settlement. In the north lies separation and snow and far too many revelations.

Surrender. The song has ended . . . except for one important part.

=== SIDE STORY TO BREACHED BOUNDARIES ===

In the Spirit. Prince Richard has a high office in the army, a ruler who trusts him, and a loyal subordinate. He also has a murderer who is likely to kill him one of these days. Amidst the many uncertainties of his life, can Richard count on love, or will that become yet another treachery?

Dolan is a quiet young man who spends his days working as a scribe. So why does he have a dagger hidden within his clothing?

When Dolan's hidden life turns to disaster, he must make his way alone through a warring world of many enemies and few allies. Figuring out which men are his allies will take time, and not much time is left.

As an empire crumbles and civilization is threatened, Dolan must use all his wits to survive, for only he can bring to safety the greatest treasure in the Three Lands.

¶ For readers with print-reading disabilities: Bard of Pain is available at Bookshare. See also Bookshare's information on how to obtain an embossed Braille book.

The Night Watch. They are the elite unit of the Northern Army, and their power is growing. But what they need is more than power: they need wisdom.


Mystery. Three days ago he faced death by fire. Now he faces a bigger challenge.

THE THOUSAND NATIONS: a Chronicles of the Great Peninsula series ¶ By Dusk Peterson

In a shattered world of warriors and barbarisms, only the deepest ties of friendship and romance can protect them. That, and a god they may not be able to trust.

The Thousand Nations is a fantasy series about what happens after the fall of a civilization. The series is inspired by conflicts between nations during the Dark Ages.

The series is part of the Chronicles of the Great Peninsula cycle.

Table of contents to the Thousand Nations titles below.

Search for the Jackal (Volume 1 of The Thousand Nations)

When a young man named Dolan flees from the north, he finds danger on all sides. The Northern Army wants him back. The Empire of Emor wants him dead. His native homeland of Koretia may not want him at all. And his only protection is a man with motives that are mysterious and possibly deadly.

To remain alive, Dolan must forge alliances, cement friendships, break and heal a killer, and seek a lost god. Most of all, he must decide what his goal is and how high a price he is willing to pay to achieve that goal.


Resources for Chronicles of the Great Peninsula

Map of the Three Lands of the Great Peninsula.

The Three Lands research. Blog entries made by the author on research for the series.

Shared Universes: Works set in the Great Peninsula world by other authors and artists.

Updated October 2020. All titles and ordering are tentative at this point.

This text, or a variation on it, was originally published at duskpeterson.com as part of the series The Three Lands. Copyright © 2002-2020 Dusk Peterson. Some rights reserved. The text is licensed under a Creative Commons Attribution Noncommercial License (creativecommons.org/licenses/by-nc/3.0). You may freely print, post, e-mail, share, or otherwise distribute the text for noncommercial purposes, provided that you include this paragraph. The author's policies on derivative works and fan works are available online (duskpeterson.com/copyright.htm).

The series Princeling and Darkling Plain are now available here.